In order to watch/photograph a star with a high magification over a longer time, an autotracking is necessary. Otherwise, the object under observation moves out of sight due to the rotation of the earth.

The goal of the project was the development of a new control unit for the autotracking function of the Josef Mosbach refractor of the Sternwarte Überlingen (observatory). There is still an historic, fully mechanic clockwork for this mount which is not in use anymore. However, after extensive restoration, the drive can still be visited. Already in 2014, a µ-controller-based drive with a stepper motor was retrofitted for the autotracking of the hour axis. However, it could not fulfill all requirements so that the idea for further developments came up. The autotracking, for example, had to be turned off every time before the position could be adjusted with the help of the motor.

The following requirements could be fully implemented in the course of the new design:

We started working with simple stepper motor drivers, however they made the motors far too loud. Even the creation of half-steps via the self-scripted code could not improve the situation signifcantly. Only the changeover to further-developed components with an interpolation of 256 intermediate steps improved the noise level enormously.

All elelctric components required for the light and motor control are placed in one housing. We developed and cut small PCBs such as for the manual control, the supply and control of the stepper motor and LED drivers, the display and voltage converters. All components are safely installed on the mounting plate that was specifically designed for this project. In order to improve the clear arrangement of the whole design, all cables are routed in cable ducts.

The control unit was installed on August 18, 2018 and then went into test operation. The members of the Überlingen observatory were very enthusiastic about the reliability and precision of the autotracking as well as its easy handling.

The last point to be done was the design and installation of the declination axis drive.

The following components were installed: 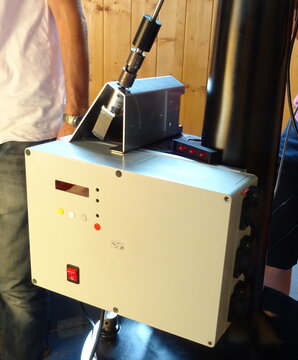 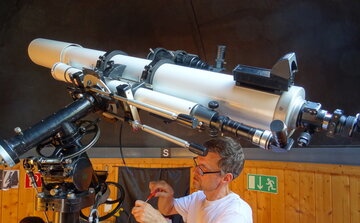 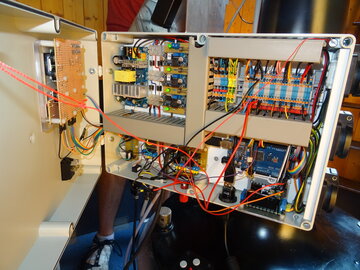