A ghost game for two players developed with Unity in the course of the Unity GameJam of the game developer meeting in the Toolbox.

The game is intended for two players at the same computer.

You can move by using the W A S D and the arrow keys or the direction keys of the controller. Using Ctrl and Shift at the keyboard or X and Y at the controller enables you to shoot - two keys each as there are two types of shots: the yellow fire ball is the "normal" shot that takes an energy point of the opponent (if he was hit). On the other hand, the green fire ball gives an additional energy point to the player who fired it in case it hits the opponent. This special shot however can only be used every 10 seconds.

The balloons function as obstacles as they reflect your fire balls and therefore can hit yourself. Some of the balloons carry power-up packages that you can catch if the balloon is destroyed. The power-up provides a protective shield to the player resisting one shot without losing an energy point.

The target of the game is to hit the opponent as often as possible in order to make him lose energy until none is left.

The game was published at GitLab under the MIT license: gitlab.com/ToolboxBodensee/gamedev/unity_ghostgame

Pictures from the game 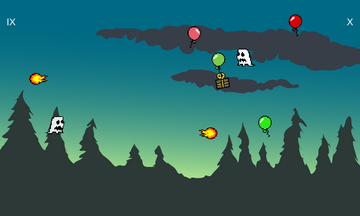